How Self Reflected Was Made

Self Reflected was made using an elaborate combination of hand drawing, deep neuroscience research, algorithmically simulated neural circuitry, adapted brain scan data, photolithography, gilding, and strategic lighting. For a basic idea of how microetchings work, please watch the Introduction to Microetchings video on the microetchings page.

SELECTING THE BRAIN SLICE TO DEPICT 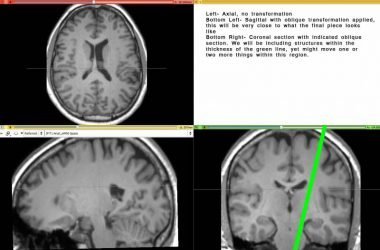 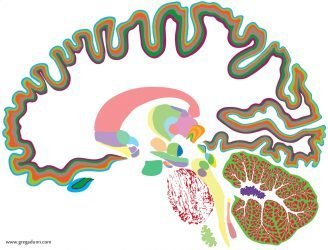 Master map of all regions of interest in our selected brain slice.

The first step was to make the decision what part of the brain to depict. We decided on a sagittal slice as it is the only non-symmetrical brain slice that would allow us to show maximum diversity in structures. This became the basis for all future work. We began by characterizing all brain regions within the slice of interest so that we could perform directed research at each part of the brain in our slice to inform the anatomy, neural activity, and overall composition. 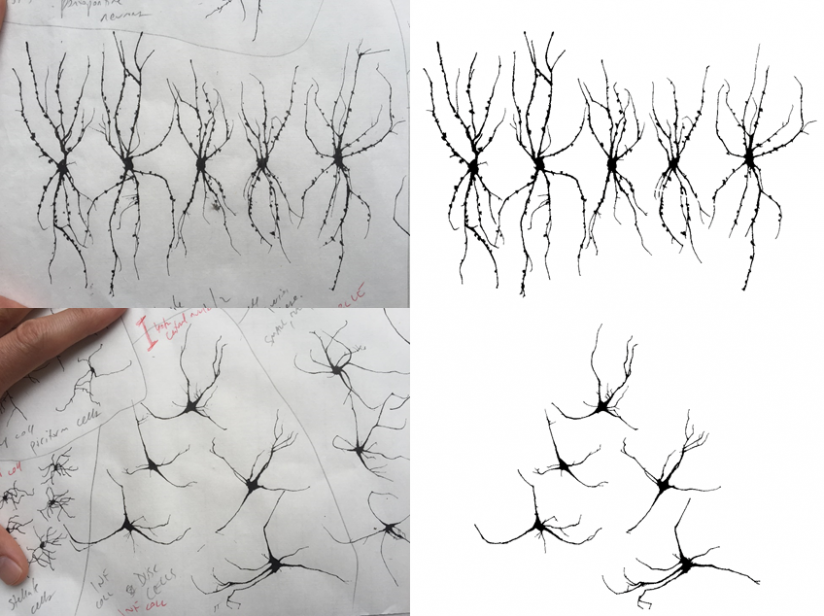 Hand painted neurons are scanned into the computer and are turned into vector images, mathematical descriptions of the neuron’s outline.

Based on a large volume of data collected by undergraduate students about the brain regions of interest including characterizing the forms, sizes, connectivities, and other characteristics of all neural types in each region, we began to hand paint examples of the around 100 different neural cell types in the entire brain slice.

Analysis of painted and scanned neuron vector libraries. These neurons are from the inferior olivary nucleus. 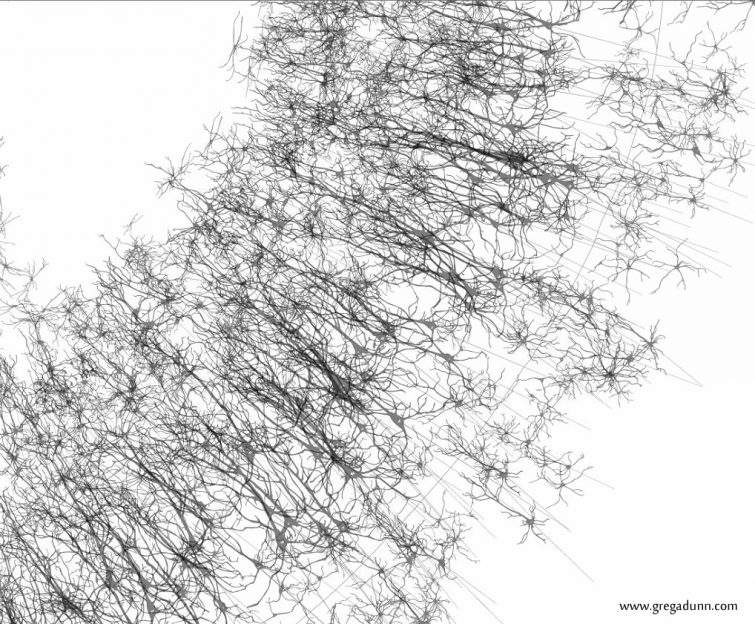 Thousands of hand painted, digitized neurons are digitally laid down in an anatomically accurate fashion.

In these images of the layered cortex, hand-painted neurons have been scanned and turned into vectors, mathematical descriptions of their outlines. We painted down huge swaths of gray matter with on the order of 100 or so different categories of neurons, about 500 total drawings. There are around 500,000 neurons in the entire piece. 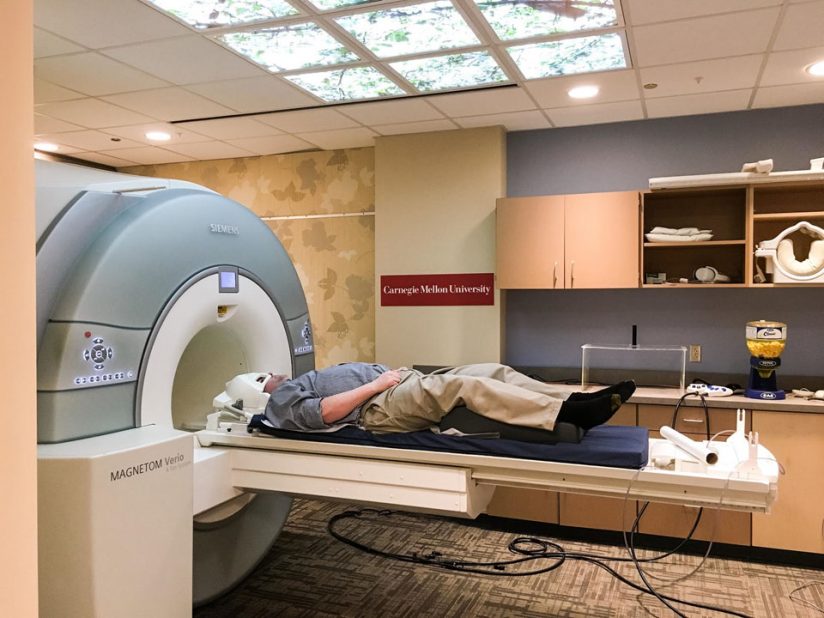 Each neuron connects to every other neuron through its axon, long tube-like structures that conduct electrical impulses called action potentials that are the basis of communication for the brain. Half of the brain is composed of these axons, also called white matter, whose structure is very complex and contorted in three dimensional space. Dr. John Pyles, a neuroscientist at Carnegie Mellon University, contributed diffusion spectrum imaging data to the project. This technique measures the direction that water diffused under a magnetic field and is used to reconstruct where the axons are traveling in space. We did not use this data verbatim, but rather adapted it and used it to inform our own hand drawing of the structures to allow for simpler interfacing with downstream steps that constructed the neural circuitry itself. 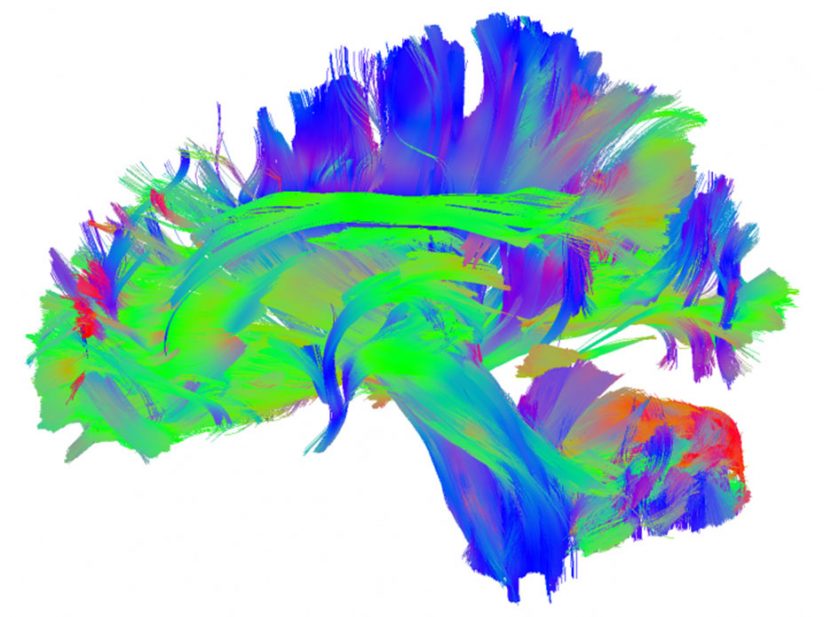 Filtered diffusion spectrum imaging data of all of the axons in our slice of interest. 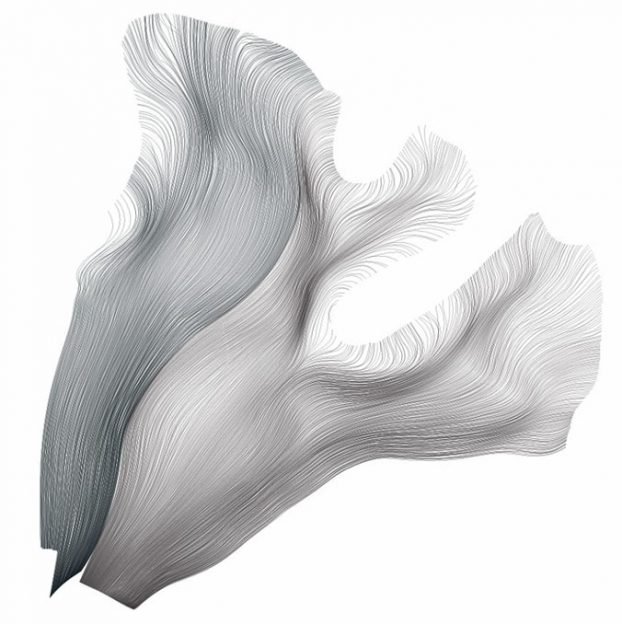 Hand drawn axons mathematically adapted for use in the final piece that were informed by the DSI data-set. 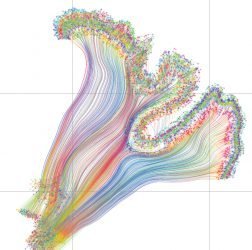 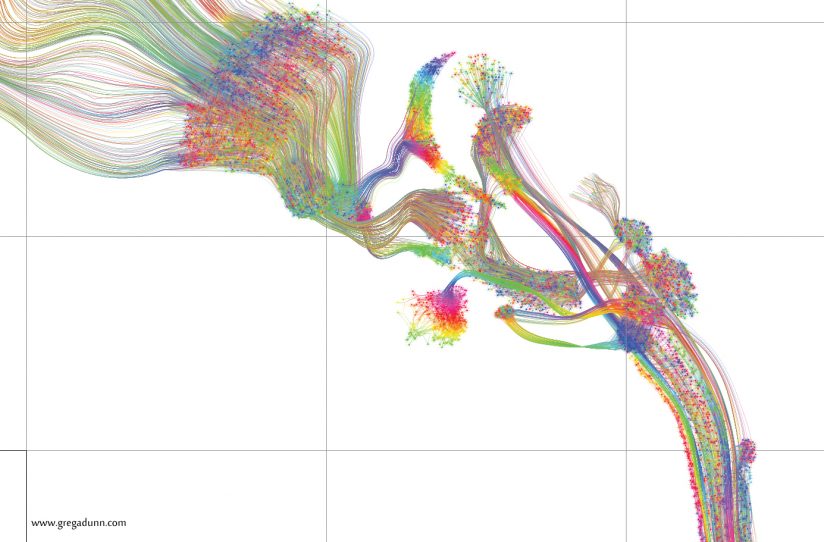 We painted down the neurons, sets of axons were hand drawn using data from diffusion spectrum imaging as a guide, and deep neuroscience research was completed to determine regional and local connectivity. Using these data, we then used algorithmic and mathematical simulations to chaotically link up the center points of neurons with the end points of axons and to infuse causality into the connectivity, the most complex part of the project. As microetchings are animated, these connections have timings associated with them and influence connections later made within complex neural circuits. We could control action potential speed, bursting vs. tonic behavior, axon diameter, degree of randomness in connectivity, etc. These problems are mathematically related to solving complex delivery routes for logistics companies.

At the end of this step, we have raw microetching data as you see above. The color codes from what angle relative to the microetching you will see a given object. Everything that is red will be seen from the left of the microetching, and as you walk to the right you will see orange, then yellow, green, blue, and violet. This helps you to imagine what this will look like when translated into physical, gilded microetchings.

FINAL ARTWORK PLATES TO BE STRIPED AND PRINTED ON TRANSPARENCIES 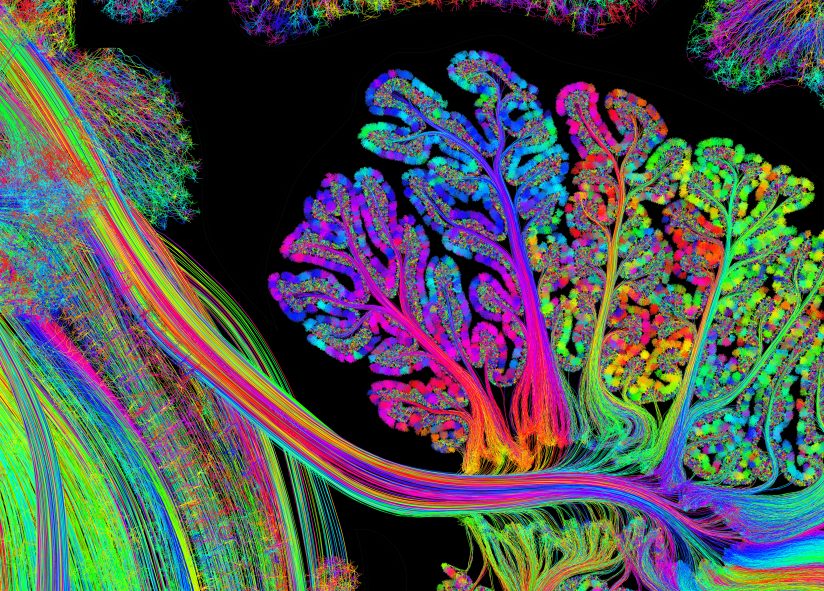 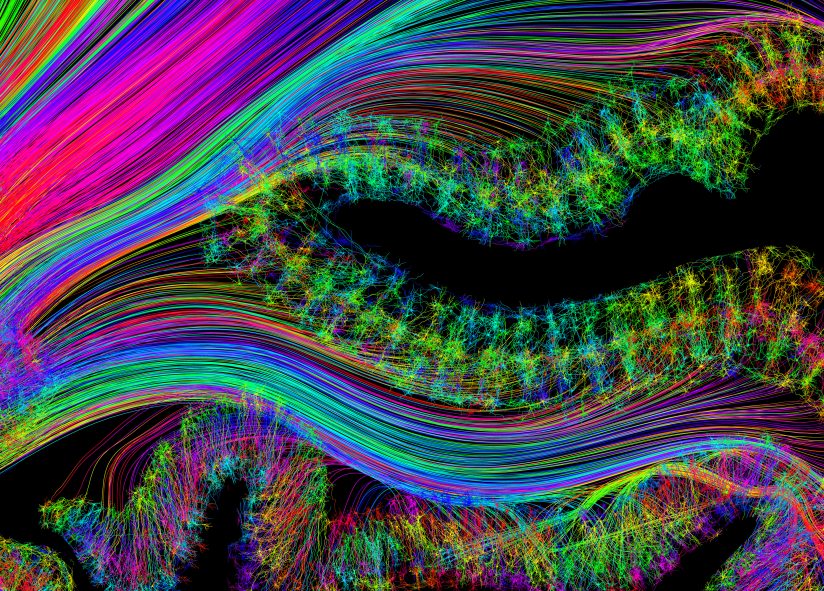 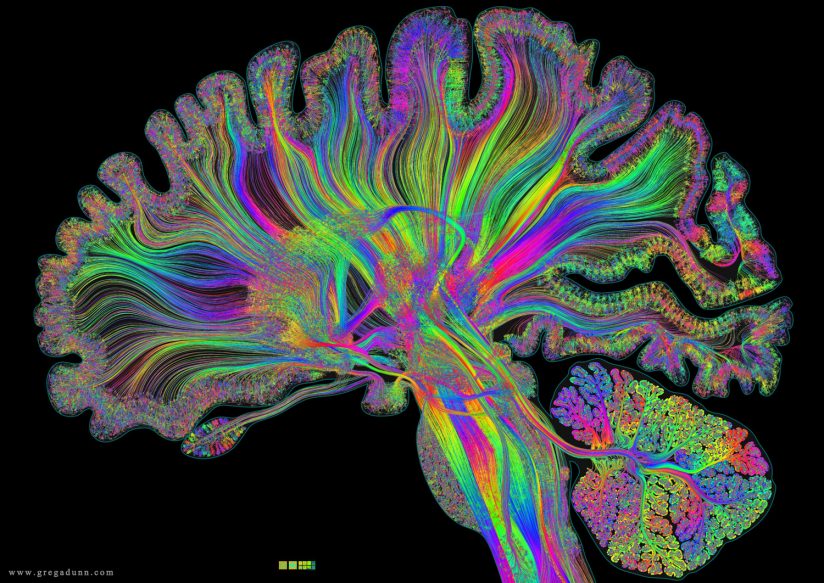 Final timing values and rendering on Self Reflected. This artwork is 8′ X 12′ and is divided up into 25 individual abutted microetched plates. 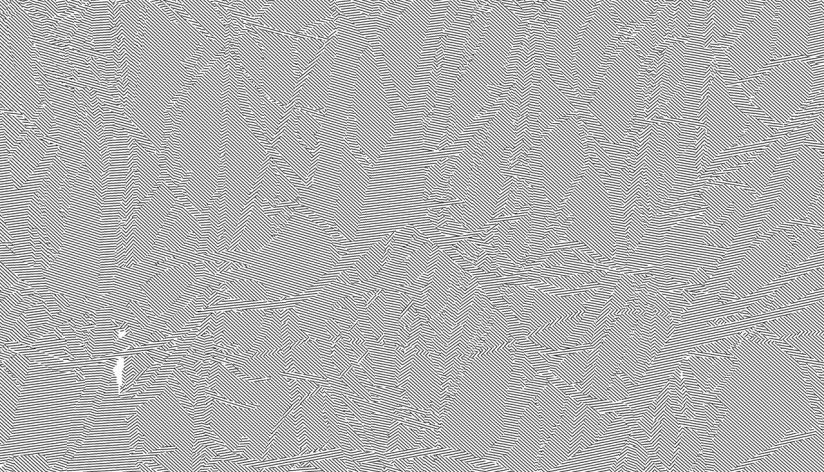 A closeup of the final render wherein color encodes from what angle the viewer will see each pixel. 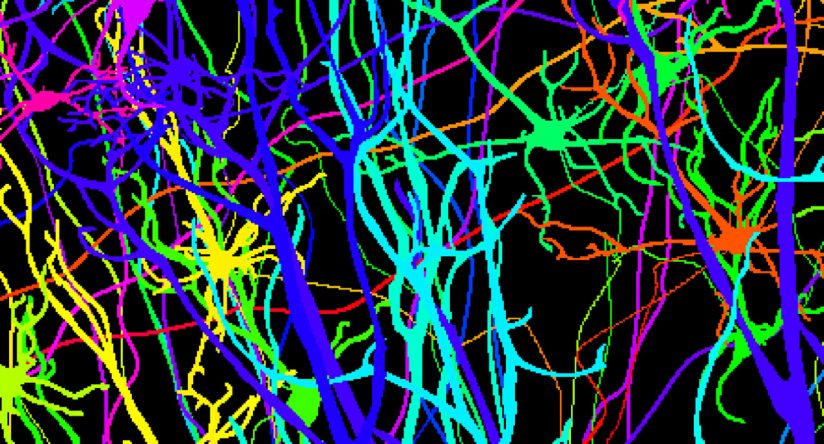 Generation of final striping artwork from the colored images that defines objects by angle of hatching and is the basis for which wavelike structures will be engraved into the surface of the etching.

All 25 plates of finalized artwork were processed with custom written algorithms that went through each image, pixel by pixel, asking the questions: 1. Where is the pixel in space, 2. Where is it in relation to the light source, and 3. Based on that pixel’s color, where do we want to reflect the light to. Using this data we calculated the hatching angle for each object and produced images like the bottom image above.
These images were printed at ultrahigh resolution using specialty printers onto transparencies. These transparencies, which contain all of the artwork required to make a microetching, were used in subsequent photo-lithography steps. 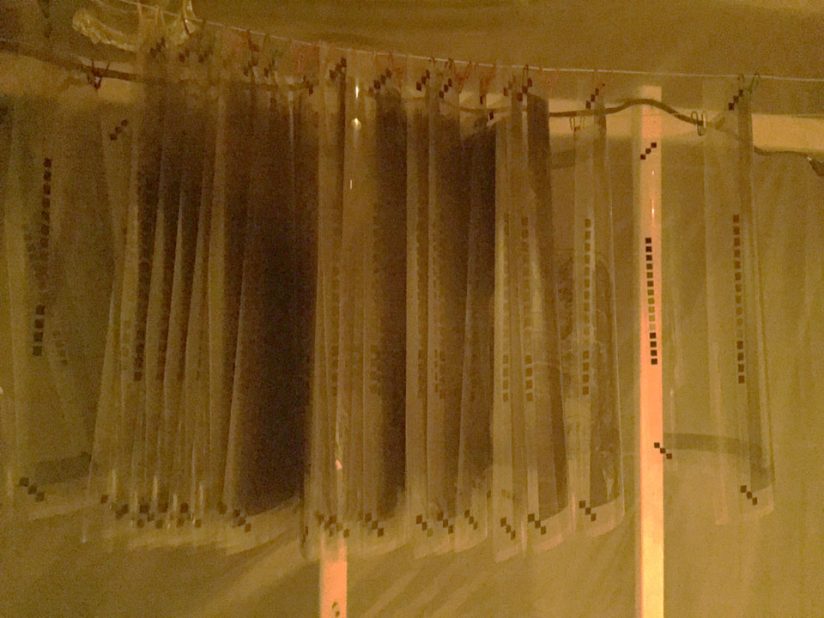 25 printed transparencies that were used to make the 25 individually etched plates that make up Self Reflected. 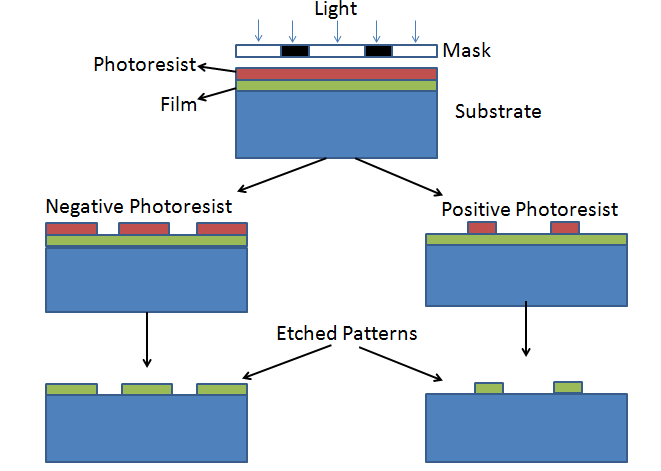 A scanning electron micro-graph of the surface of a microetching after photolithography at 120X (left) and 1200X (right).

Transparencies are placed upon sheets of photoresist, a polymer that is sensitive to ultraviolet light. The black printing on the transparency prevents the light from striking the surface of the resist and protects it, whereas all clear parts of the transparency allow light to come through which polymerizes and hardens the surface. In this way, the microscopic details are “burned” into the surface.
The plates are then developed in a basic solution that eats away the resist only underneath where the black printing had been, yielding a three dimensional, wave like surface that reflects light directionally. 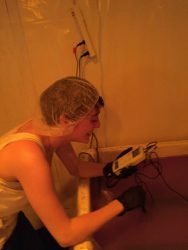 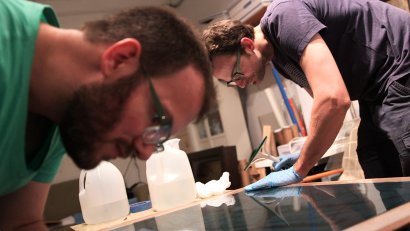 Brian (left) and Greg (right) placing a transparency on the photoresist. 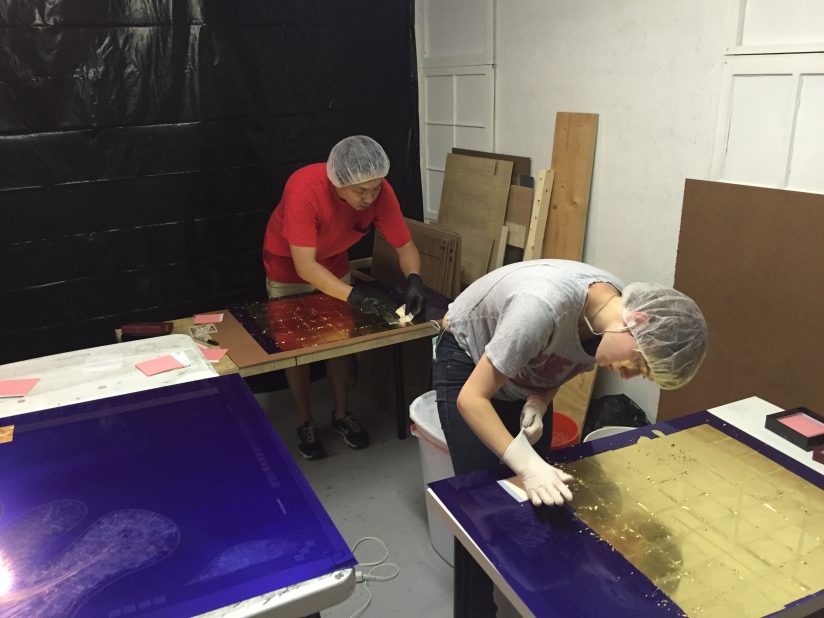 To increase the reflectivity of the surface and to beautify the etching, individual squares of gold leaf are applied to the surface. Gold leaf is extremely thin and does not appreciably interfere with the surface etches, and this characteristic coupled with gold’s softness, resistance to oxidation, and beauty, makes it an excellent choice for brightening the surface of the etching. The final 12’ X 8’ microetching contains 1,750 leaves of gold.

CUTTING DOWN PLATES AND ASSEMBLY 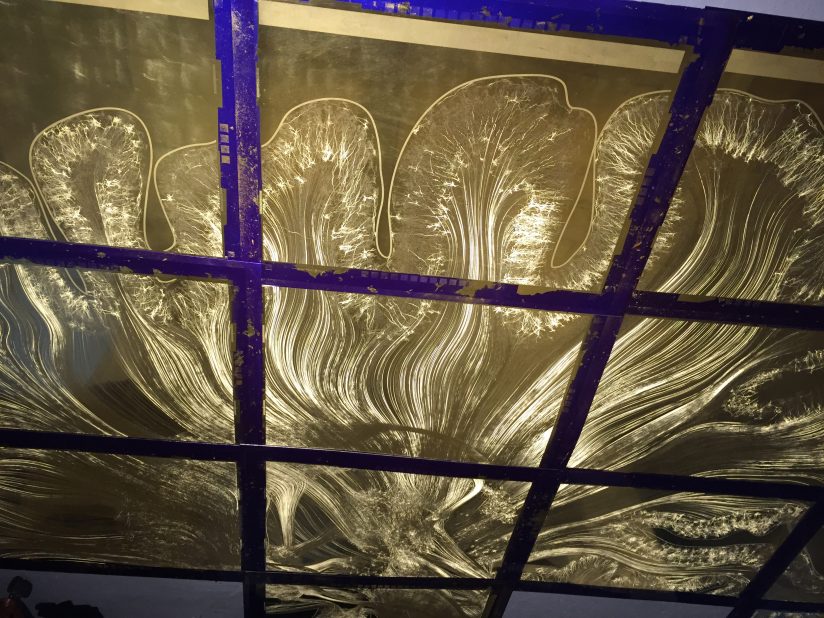 Preliminary assembly to check continuity of reflective brightness across plates. 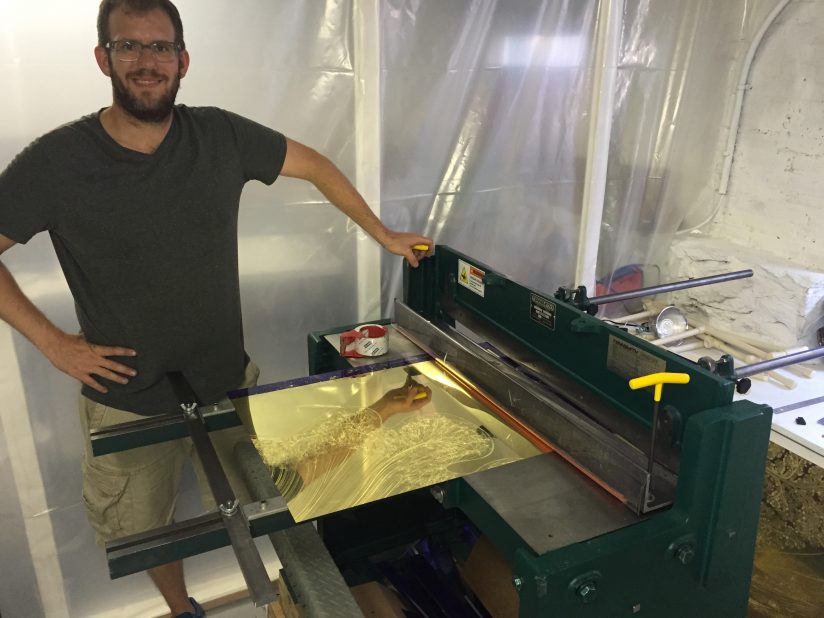 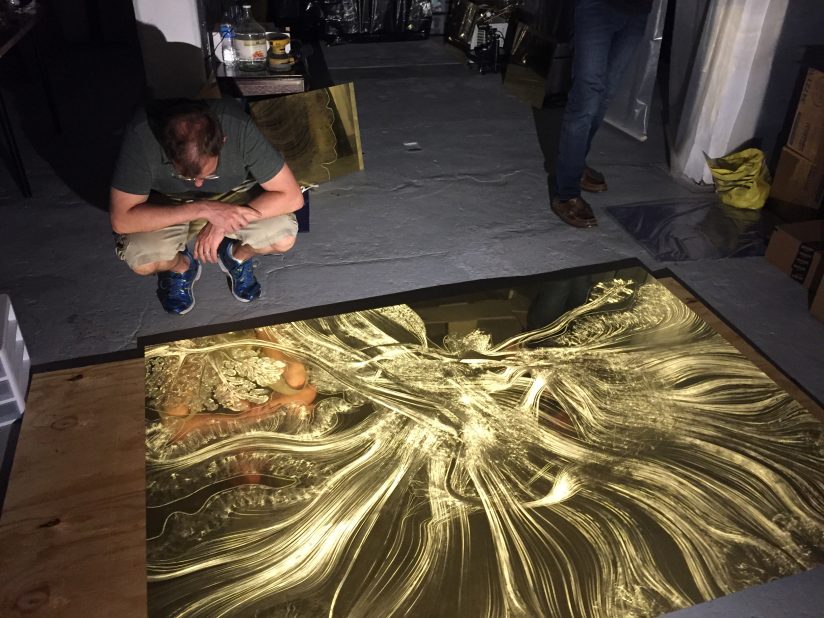 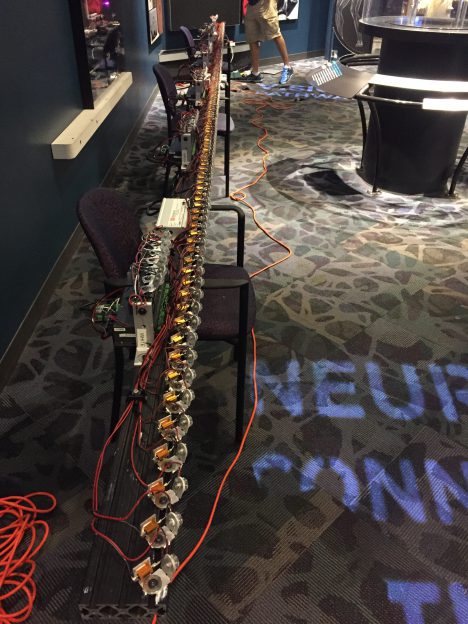 LED array on the light bar. 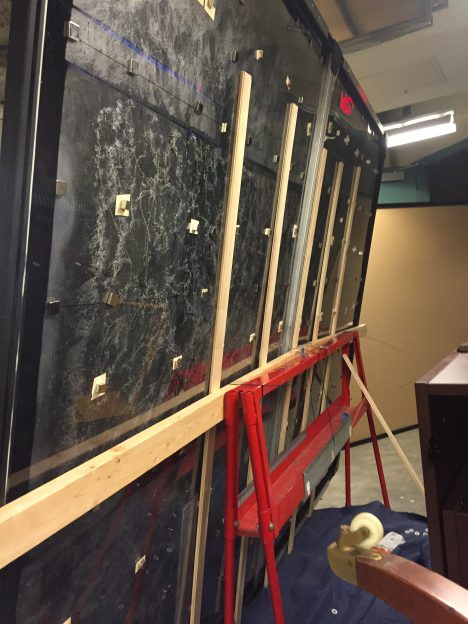 A modular LED light bar was constructed using 162 LEDs that lights the microetching using programmable patterns of movement. This allows the animations of the microetching to be maximally apparent, and allows flexibility in presentation with colored lights.

Greg Dunn and Brian Edwards at the Self Reflected opening.