The Engineering behind Self Reflected

Like any large engineering project, the creation of Self Reflected needed to be broken down into bite-sized pieces. The division for this piece was fundamentally drawn in terms of scale and dimension. This project can be thought of as the collection and integration of three types of information: microscopic data, macroscopic data, and behavioral data.

We used Adobe Illustrator to form vectorial brushes of the hand painted neurons. These brushes were used to paint each functional brain region. Large scale photos were used as a guide for the overall placement of the regions while micrographs were used to attempt to match texture. Each brain region was saved separately and the file was then processed to extract the location of the soma of each neuron. This yielded a data block in which each neuron has been located and numbered region by region. This data was set aside for later.

Through the use of Functional MRI and various other probing techniques, scientists have a rough idea on what regions of the brain are used in what kind of thoughts. Through a series of interviews with various experts, Greg gathered this information and distilled it into a highly formulated script suitable for a computer. Each line of the script started with a named collection of neurons and routed them to the set of neurons they are connecting to using a set of white matter fibers. The connected neurons would become “activated” themselves and could then be used for a subsequent step In the neural pathway. Each step had about 25 different parameters that could be set including velocity, size, roughness, beginning count, end count, efferent connections, densities, and many others. There were about 25 such neural pathways, each with upwards of 25 steps.

An example of how circuits are programmed. Each horizontal line is one step in a choreography, and all columns are variables controlling such things as action potential speed, whether a population of neurons fires as a burst or individually, how thick axons are and how much randomness there is in their appearance, etc. 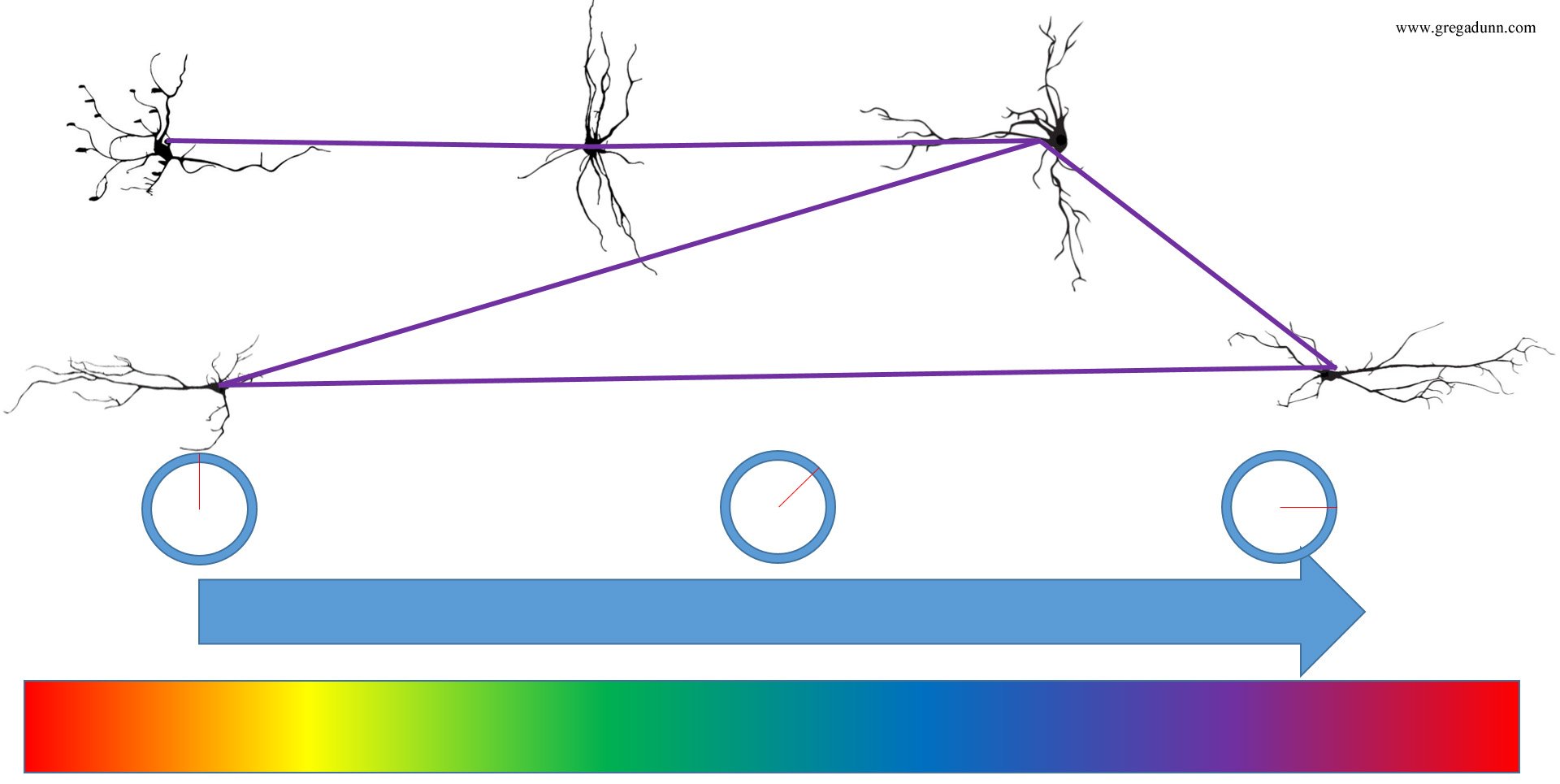 As each step in a circuit progresses, the animation moves forward in time. We code time in color wherein red represents time=0. Subsequent animation then travels through the spectrum as time progresses such that for example yellow pixels are seen later in time than red.

A rather involved computer code read each script and used it to construct a causal network of neurons within the brains.

This was done in the following steps:

Each neural pathway imported and interpreted to determine the neuron counts required of each region and perform basic checks for feasibility.

The list of all available neurons was consulted. For each step of the choreography, a population of efferent neurons was chosen, labeled, and removed for the list of available neurons. While not purely biological, within a microetching a neuron cannot fire more than once. In the case of long range connections, efferent poplutions were heuristically chosen based on the positions of the afferent activated populations, track set data, and a combination of parameters that effected a stochastic drawing. Short range connections did no utilize track set data but was otherwise similar.

IMAGE: population selection. Caption: simplified neurons (green and red circles) and axon tracks (black lines) are chosen to determine which of the neurons are available (green) or unavailable (red) for use given the constraints we designated in the choreography spreadsheets.

With a limited population designated for each step of the neural pathway, the problem of forming neural connections was now tractable. The connections were created using Linear Programming to optimize the creation of links between the afferent population, individual tracks in the track sets, and the efferent population. The cell body centers are now all linked together in a large mathematical causal network. 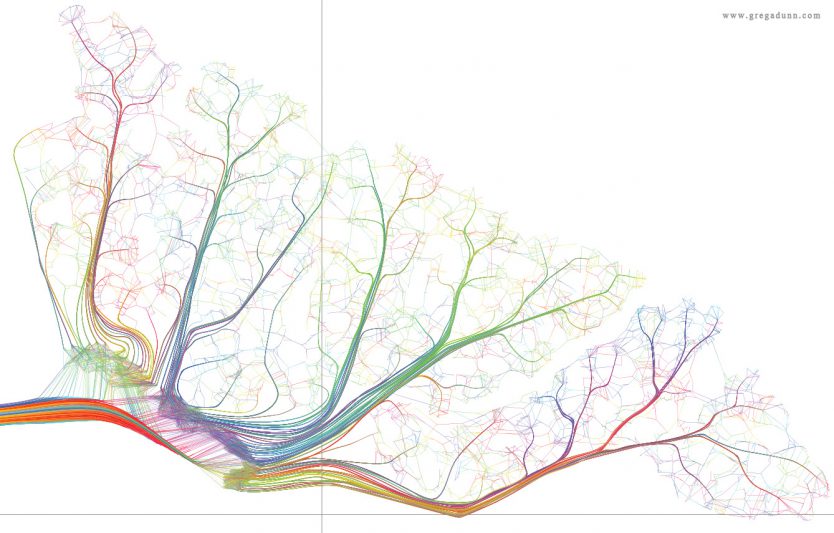 A simplified mathematical map of how each neuron will be connected to one another. This step does not take time, direction, or aesthetics into account, it is purely an exploration of mathematical feasibility.

Each edge of the network has a length in microseconds based distance between the two neurons, use of an axon, and the action potential velocity profile. The whole system of edge lengths could be inserted into a least-squares solver to find the optimal firing time for each neuron. This yielded a spatial-temporal network of cell body centers.

After the algorithm solved the network based on our input criteria, it assigned color value to each neuron (simplified star shapes) and along each axon.

At this stage, we are using color hue as a proxy for time. The spatial-temporal network was consulted and each cell body centers werereplaced with the appropriately colored vectorized cell bodies from the original art files. The keys were removed algorithmically. The axons were drawn in using a combination of smoothing filters and noise filters. These were colored along their length with smoothly varying hue to denote the propagation of the axon potential along its length.

Each neural pathway was saved as a separate vector artwork file.

The painted neurons are substituted for the simplified mathematical neurons used for computational purposes and the primary microetching data is complete in both form and time.

Finally, all of the vector artwork files were then opened together and composed into one single image. This image was then divided and saved as 25 different raster images, each representing a separate plate of the microetching.

Microetchings are comprised of collections of angled ridges that are designed to gather light from a light source and one location, and reflect it to an observer at another location. Through a smooth and subtle change in the angles of the ridges, microetchings can appear to animate either by moving the light source or moving the observer. In the case of this work, we choose to “move” the light source by creating a giant linear array of almost 200 LEDs lights illuminating the piece spanning close to 40 feet. Each one activated in turn to illuminate the piece from a slightly different location giving the appearance of motion of the light source.
IMAGE: light bar. Caption: a portion of the modular LED light bar that illuminates Self Reflected

The color of each pixel is used to denote the time of the neural activation. However, given the mechanism through which microetchings work, each color now corresponds to a different LED light within the array. Each pixel of the resultant image then is subdivided into an 8×8 grid and replaced with a binary stripe pattern that will be used to create the ridges. These 25 very high resolution black and white images were enormous. These were sent off to be printed on clear plastic sheets by a printer who specializes in the creation of masks for microfab lithography. 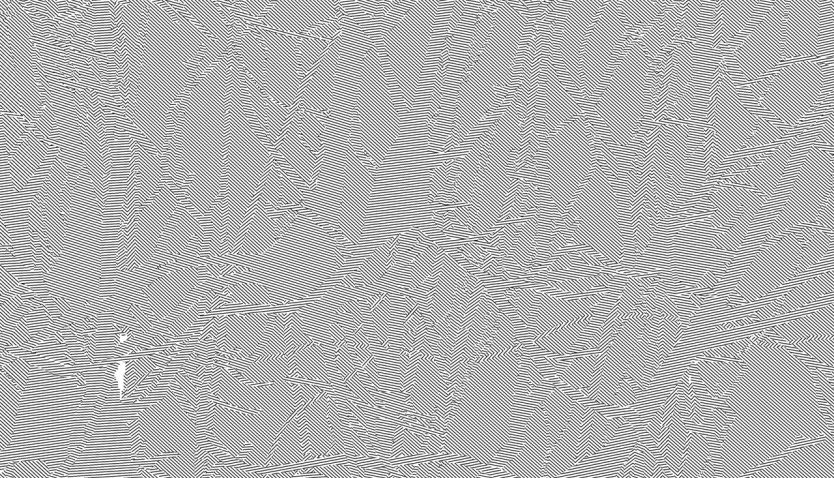 A high magnification image of the engravable data type of a reflective microetching.

The exact placement of the light source is critical to the appearance of the piece. The geometry of the angled ridges needs to be precisely tuned to the position of the light and to a chosen optimized point that the viewer is standing onto which all of the reflections are optimized and directed. In general, the math works out such that the optimal solution is to have a very bright, very small point source of light that is infinitely far away that will cast parallel rays onto the piece. As this is not feasible, the geometry of the emission pattern of the light source must be taken into account to compensate and correct for nonlinearities. 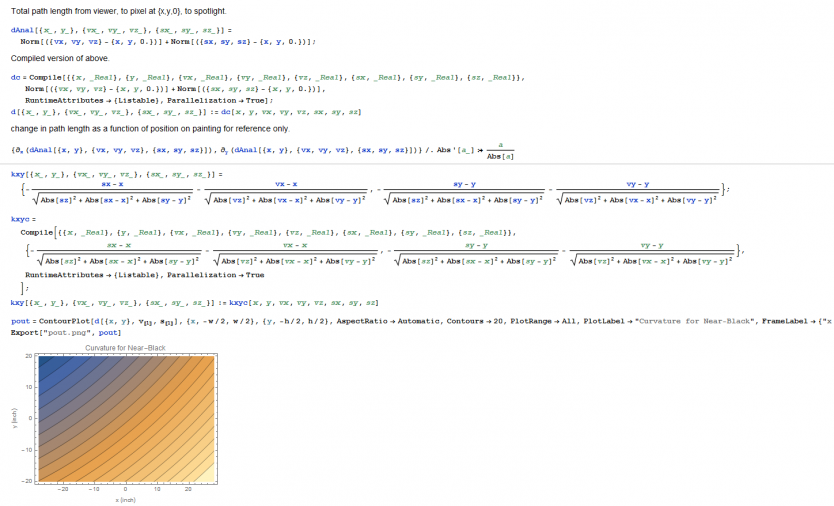 Some of the mathematical analysis to simulate the appearance of the microetching under varying lighting geometries.